Sam Kelly & The Lost Boys: Filming ‘When The Reivers Call’

Breakdown of the ‘When The Reivers Call’ video shoot

Working with Sam Kelly & The Lost Boys early in 2017 had been an entirely positive experience and I was definitely up for doing something else with them.  To be honest I always consider it a blessing that I get any work at all, let alone repeat business, but when I have been fortunate enough to work with people for a second or third time, I’ve always found that the results incrementally improve.  I guess it’s to do with trust; knowing how each other works….something like that anyway.

So when the message from Sam bleeped onto my phone back in November, I didn’t spend too long deliberating:

‘When The Reivers Call’ is the fourth title on the ‘Pretty Peggy’ album.  As a track, it’s definitely at the rock end of folk-rock and my first thoughts were that this needed to be a gritty, edgy kind of performance video.  Luckily Sam was on the same page; we pretty much interlocked on the rock-style treatment straight away.

Location wise, I didn’t have a long lead-time to find somewhere.  The industrial location we ended up in was my second choice and quite different to the first which was a more conventional performance space.  In hindsight it turned out to be a blessing in disguise; the factory location really worked and ended up being a key visual feature of the final video.

Sam and the guys travelled up from Bristol to the Midlands on the day of filming; they’d taken a day in the middle of their UK tour to shoot the video.  Traffic woes meant that we were later starting than planned.  Fortunately we’d planned in some contingency so it didn’t end up constraining us, although it did result in me being pretty focused on ‘getting on with it’ when the chaps arrived! 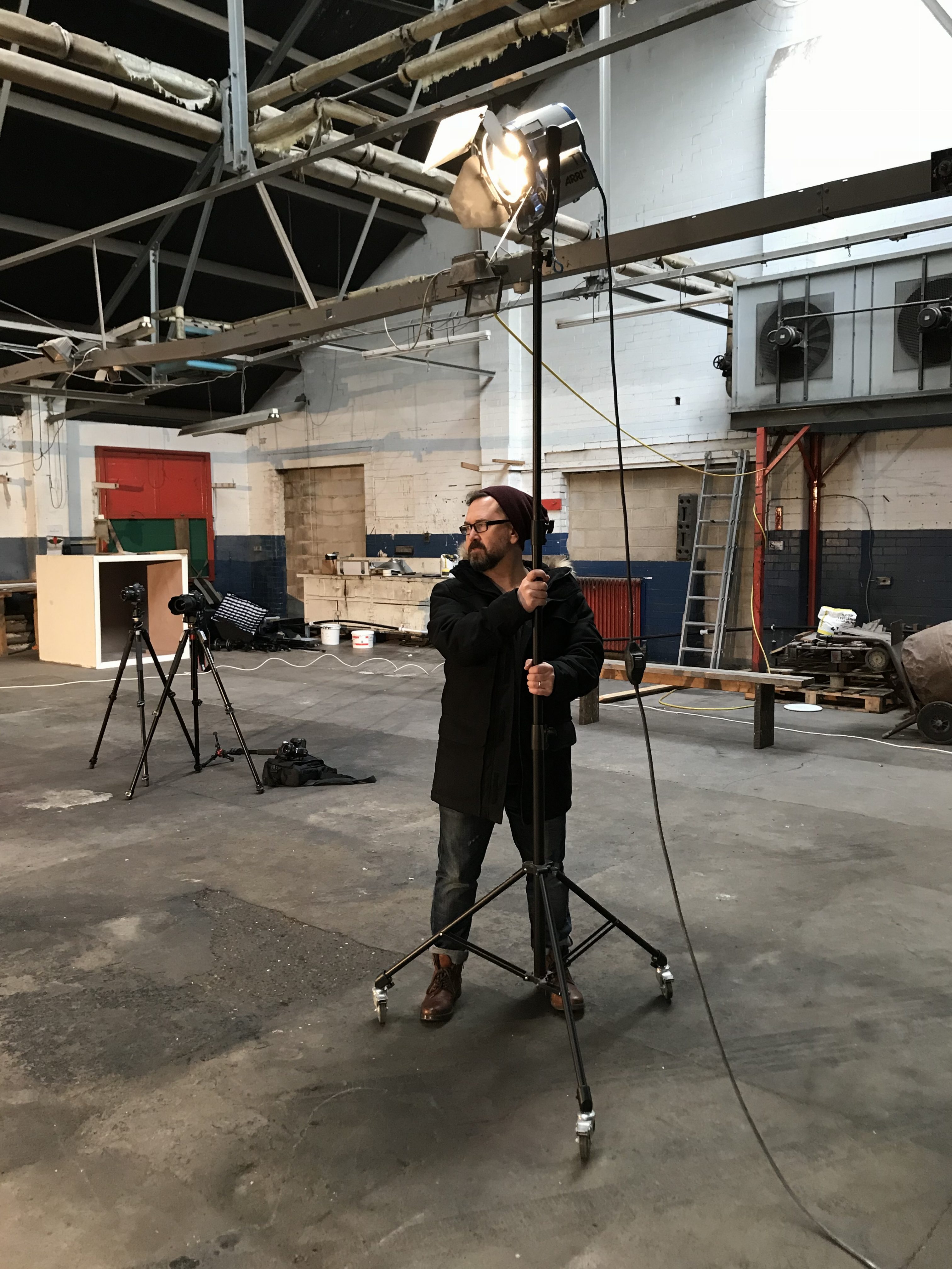 Beside the time pressure, it was a chilly location so I didn’t want to be hanging around.  Me and Mrs redwood had spent time getting the lighting up and running before the guys got there.  We’d also marked out where we wanted the band to set up.  I’d never actually seen the guys play live (a situation that I’ll hopefully be rectifying shortly) but I’d checked out bits of footage of them performing so I knew they typically performed in a straight line with Evan playing in sweeper position on drums.

(I always visualise band setups in terms of Football Manager formations, a condition caused I’m sure by excessive hours spent trying to get the legendary ‘Diablo’ formation to triumph on early versions of FM…) 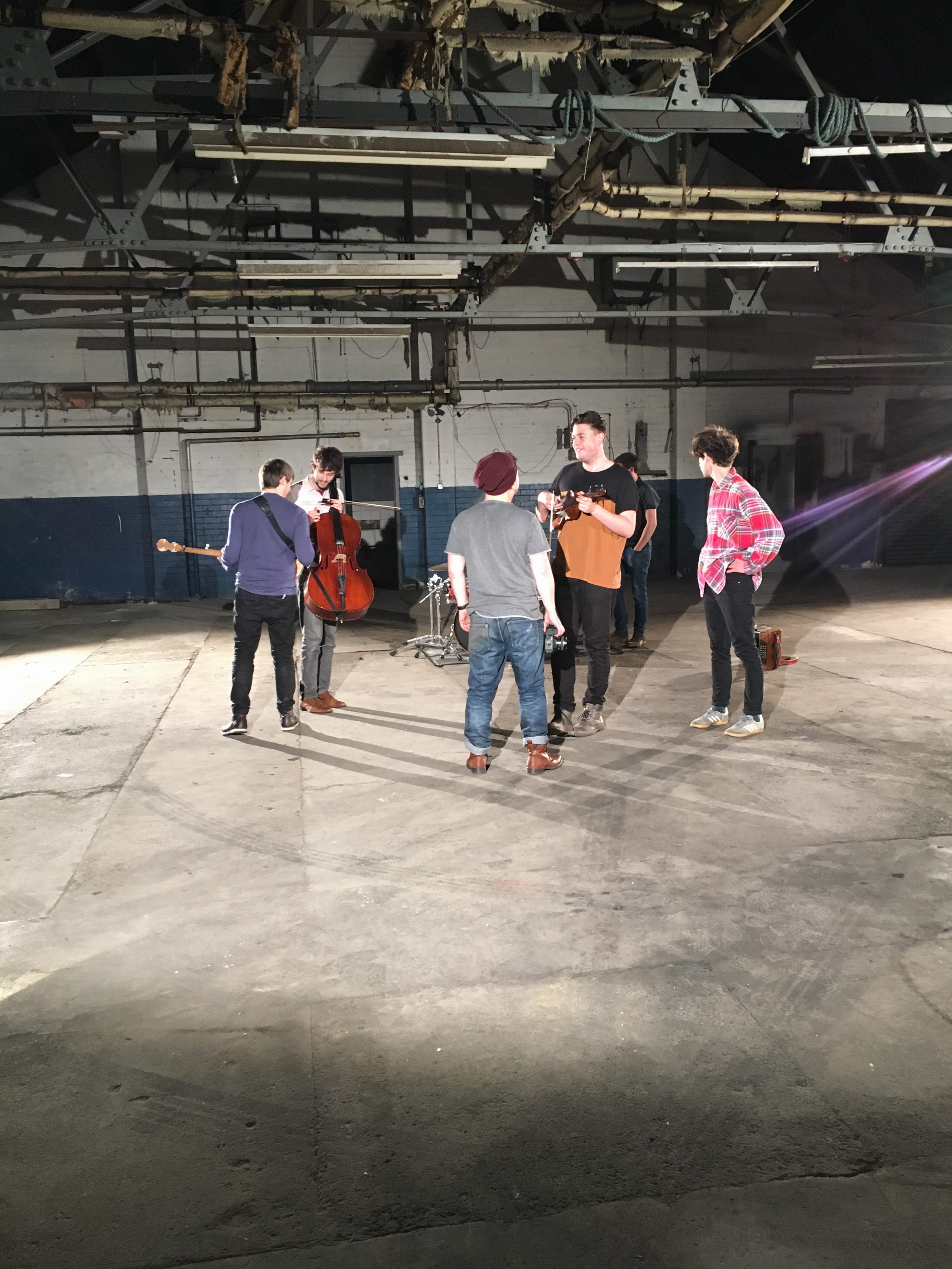 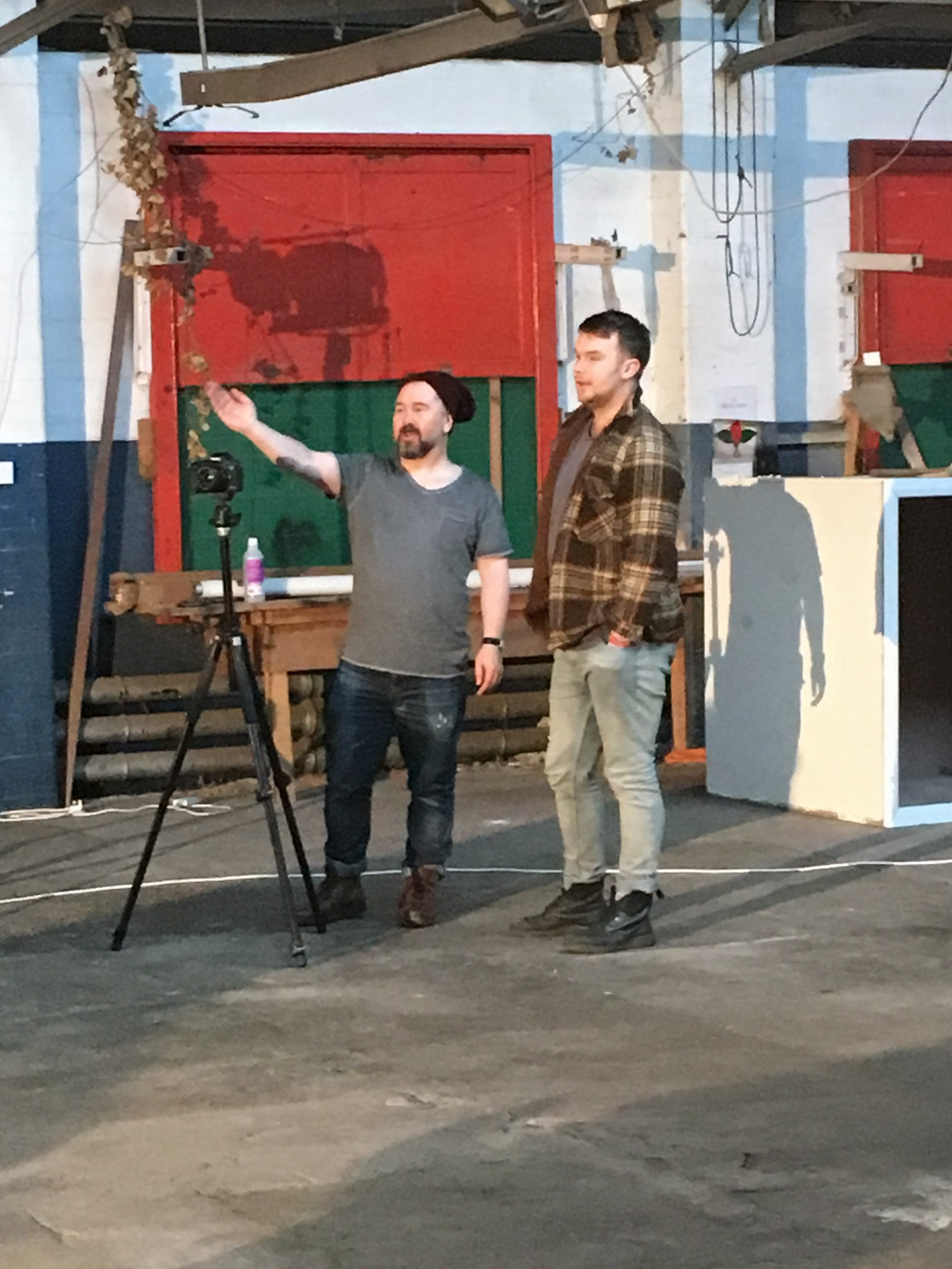 Once the guys had set up and I was able to keep them still long enough, which is easier said than done with a bunch of enthusiastic musicians, it was just a case of tweaking the lights into position; 2x Arri 1k’s at the front and 2x Arri 2K’s at the back.  I wasn’t going for anything complicated in terms of lighting ratios, just flat key lighting with an edge light created by the 2K’s at the back.  The ambient lighting in the space was pretty low, so there was a good amount of  contrast with the background.

I’m a big fan of keeping it simple, particularly when I’m filming on my own or maybe with one assistant; there’s a lot to think about doing this stuff and I’m still learning from every shoot, so I try to give myself a fighting chance by not over-complicating things.

After a couple of false starts while we messed with the playback volume, eventually everyone was good to go.  Once again Sam and The Lost Boys were a joy to work with.  They’re all ridiculously talented and they take the job seriously, but not too seriously…all of which makes for an extremely fun and productive experience.

The ‘narrative’ parts were shot towards the end of shoot, which caused much amusement as we searched around the factory space for stuff the guys could interact with; I was particularly impressed with the roller shutter door 🙂

‎The performance footage was shot over a number of takes using DSLRs and is a mixture of monopod, gimbal and hand-held.  I was working to a shoot plan based on a rough story board so I pretty much knew what I wanted to get.  The ‘money shot’ on the opening chord at 0:09 was one I’d previsualised and was basically just me running towards Sam and Ciaran with the gimbal as the track started. 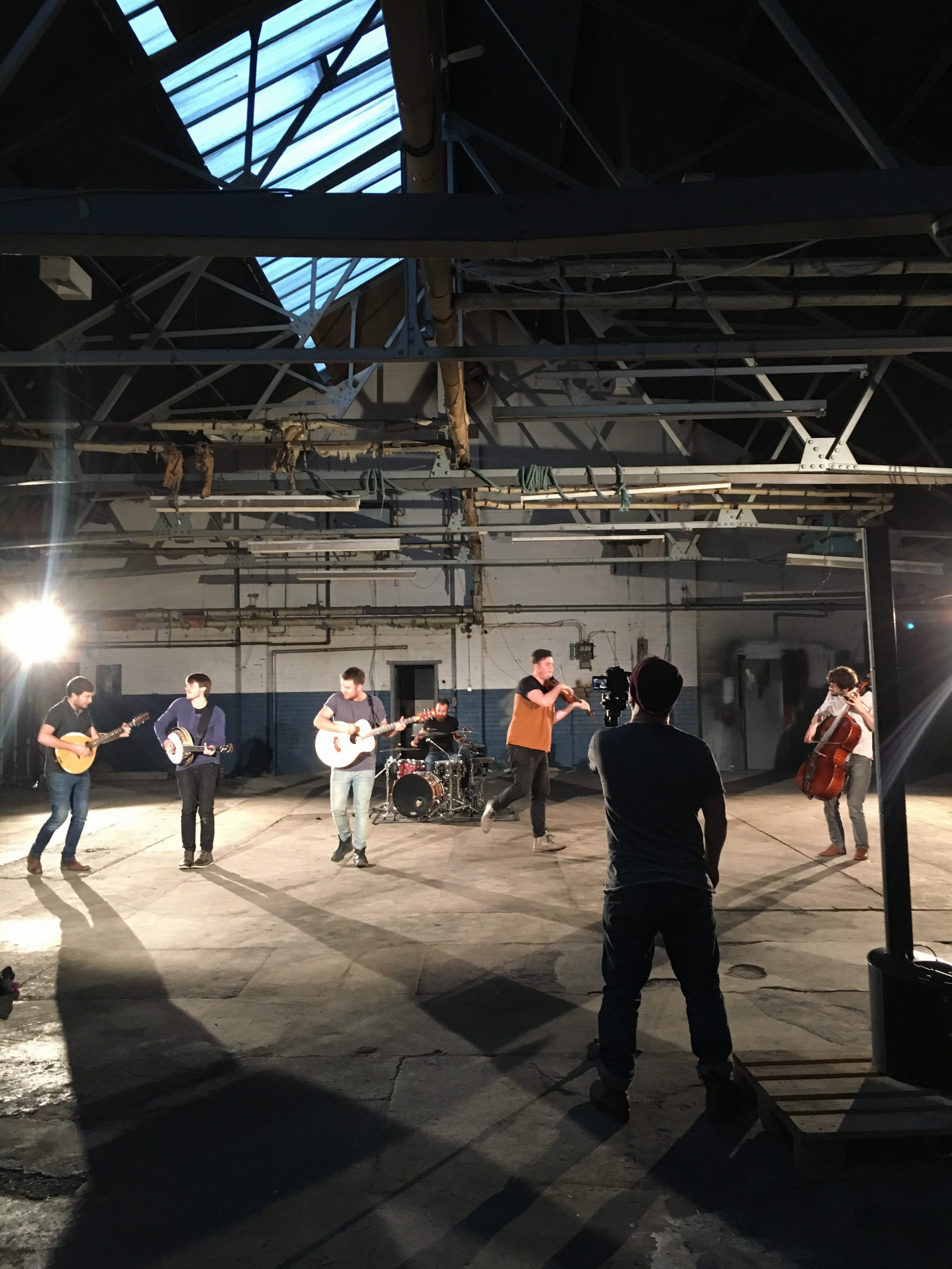 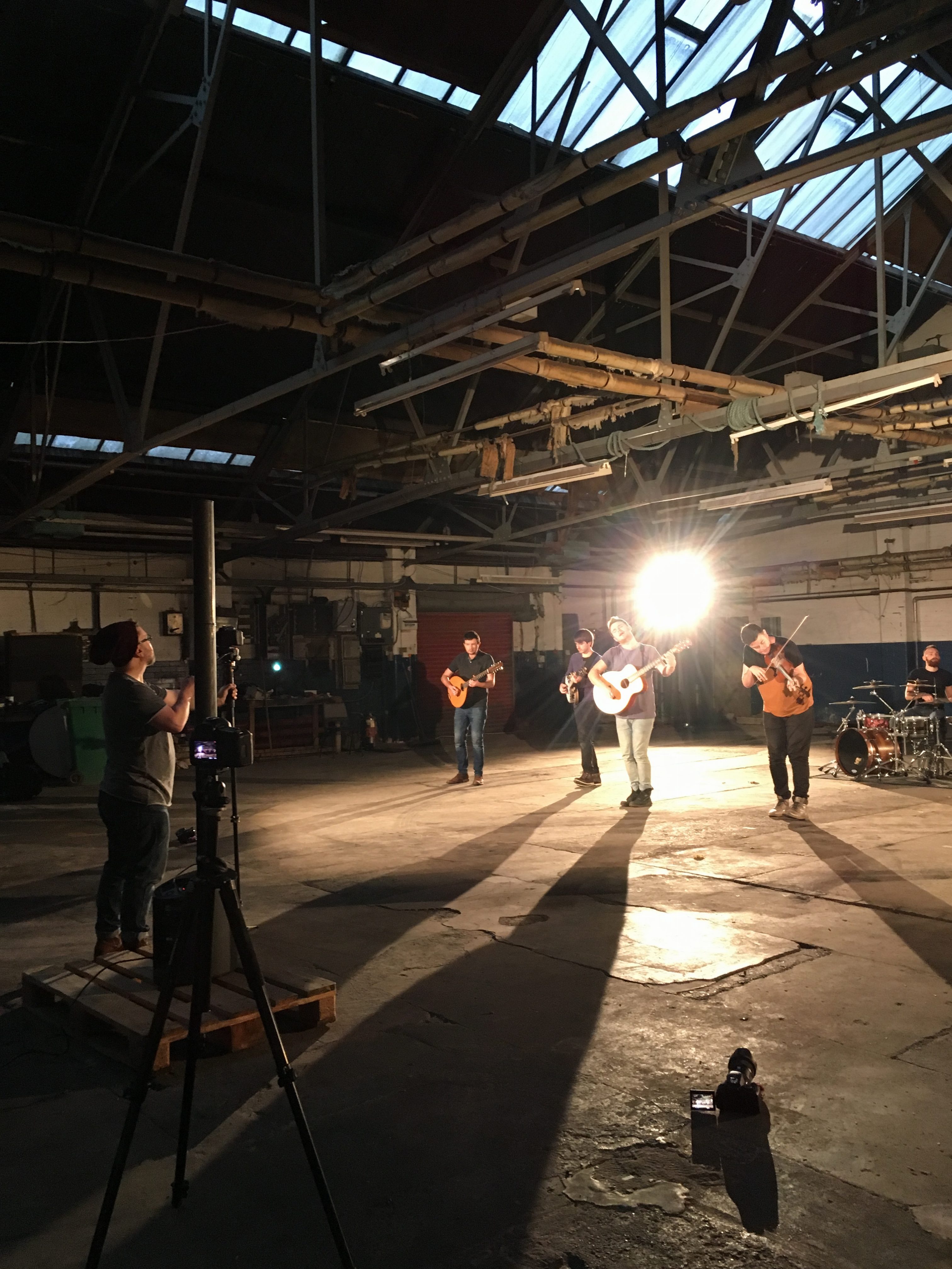 Making Sam Kelly & The Lost Boys look good in a video is pretty frickin’ easy to be honest – they’re just so damn good and the track is killer.  I do feel compelled however to point out my favourite moment of the video which is the little speed ramp I added in post at 1:00; the clip starts at normal speed and drops into slo-motion.  It’s deliberately quite subtle, you can see it clearer if you watch Evan on drums.  I just think the way Ciaran drops at normal speed and then comes back up in slo-mo is really cool (it’s the small things…) 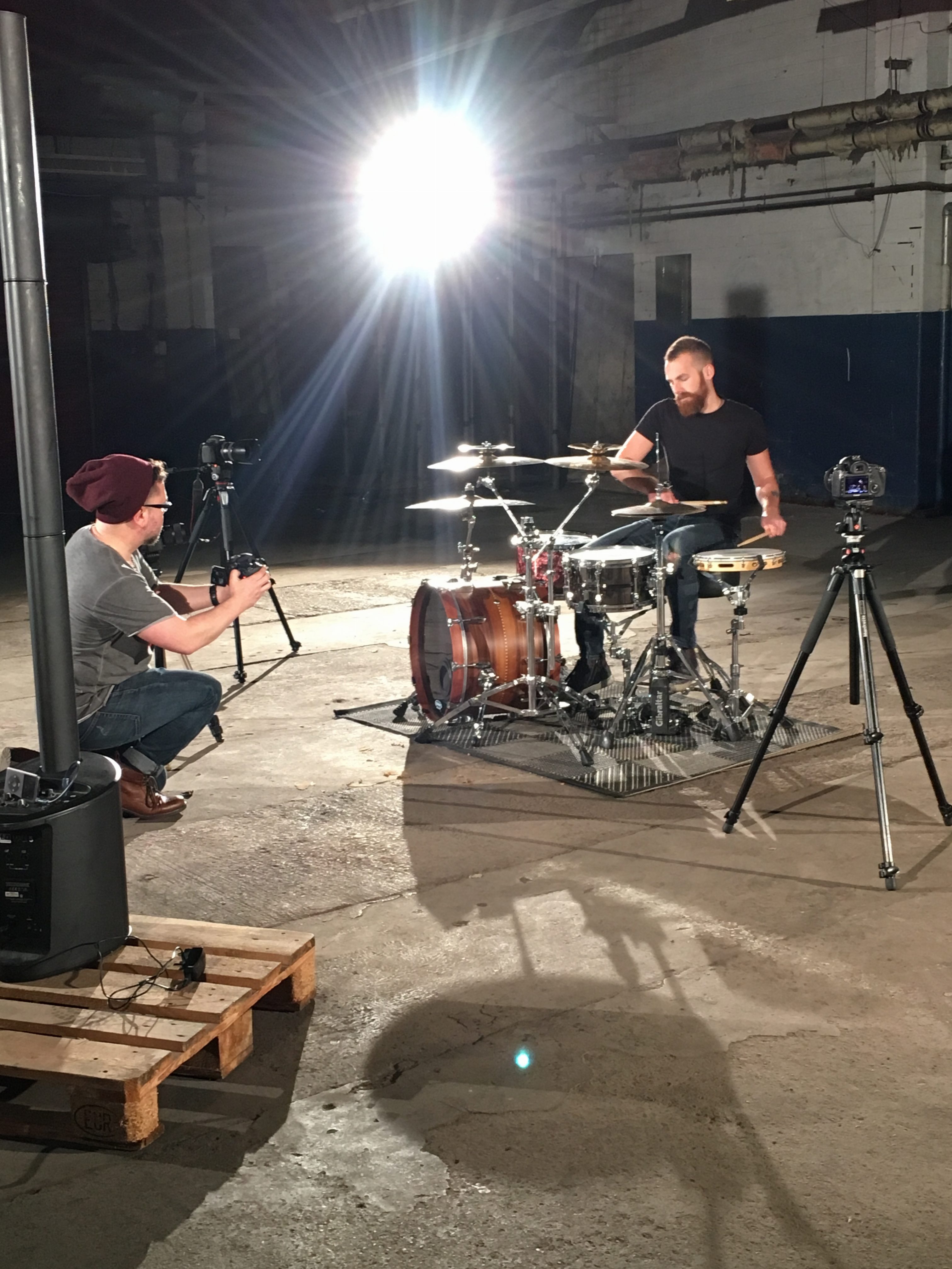 Parts of the video were also deliberately filmed with a fast shutter speed.  In our early discussions about the video, I’d talked with Sam about the intensity of the instrumental break and how I visualised that as being the point in the story where the Reivers had showed up for a scrap.  I’d been visualising the battle scenes in ‘Gladiator’ and ‘Saving Private Ryan’ where they’d created that kind of intense jittery sharpness…not that I think I’m even in the same stratosphere as cinematographers John Mathieson and Janusz Kaminski, but hey – I can have a go!  You can see glimpses of what I was going for at 2:38 onwards…

There are some continuity glitches in the final cut, but I can live with them – maintaining the pace and movement of the footage was my main focus when it came to editing.  The colour-grade on the video is a tweak on the ‘teal and orange’ thing that’s been super-popular over the last couple of years.  Trends aside, it seemed to me to really the suit the look of the location and the overall feel of the video.

I still learn new stuff every time I go out, but I was pretty happy with this as a piece of work.  It’s mainly just a joy to work with such insanely talented people.  The video premiered on Folk Radio UK on 17th January. 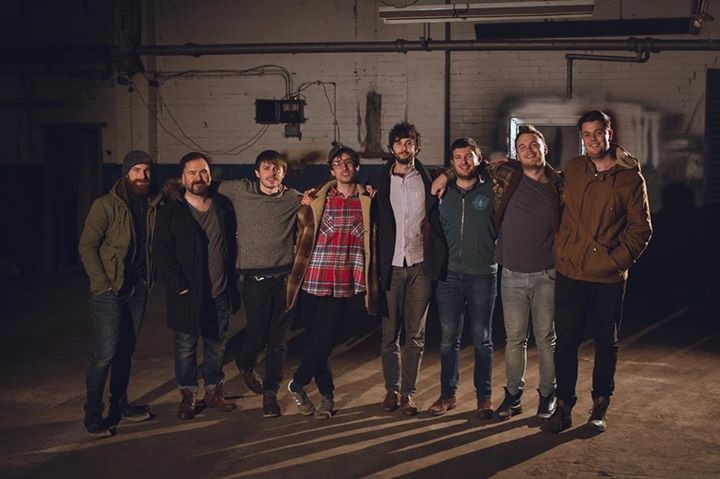 There are a few behind-the-scenes clips in the video below.  Excuse the smurf hat 🙂

You can get hold of ‘Pretty Peggy’ from all the normal places and I would strongly recommend it – one of the best folk albums of the year without any doubt.  You can also see Sam and the boys doing their thing throughout March: